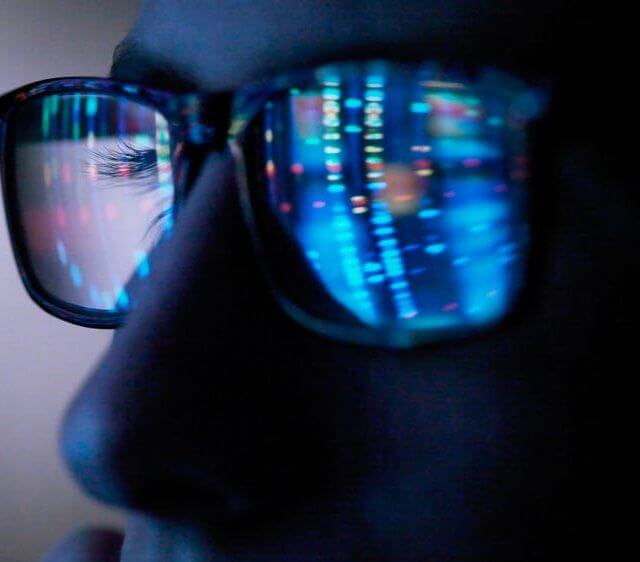 Blue light glasses are designed to filter out blue light from screens such as your phone, computer, and TV. Lately, blue light has gotten a bad reputation. Because studies show that it affects our circadian rhythm, which can disrupt sleeping patterns.

However, blue light glasses claim to do more than just help people sleep. They can purportedly reduce eye strain and prevent screen-induced headaches, too.

That sounds great if you’re someone who feels tired or fatigued after working all day in front of a computer screen. But since blue light glasses can cost anywhere from tens to hundreds of dollars, you might want to know what the research says first.

Blue light glasses will not help you with eye strain, That’s because, “the symptoms of ‘eyestrain’ that is experienced by individuals using electronics for an excessive amount of time are due to dry eyes syndrome.”

People tend to blink less frequently when they’re staring at a screen. Blinking helps keep your eyes moist, so when you blink less it can, “cause an increase in glare, pain, tearing, red eyes and even blurry vision,” says author.

“Blue light from electronics trick the brain into thinking that it’s still daytime, so melatonin production is inhibited. This can lead to difficulty falling asleep and staying asleep,” author says.

That’s why, in his practice, author says that he advises patients to use blue light glasses primarily to combat sleep problems. Kids, in particular, can benefit from using blue light glasses, since children’s still-developing eyes absorb more blue light than adults.

Blue light glasses may also be helpful for adults at night. One small study, published in Chronobiology International, found that adults who used blue-light blocking glasses for two hours pre-bedtime fell asleep faster and slept better than those who didn’t.

And another study, published by the same journal, found that those who had trouble sleeping slept better after using blue-light blocking glasses for three hours before they went to sleep than those who used glasses that blocked just ultraviolet light.

Should I buy blue light glasses?

The Canadian Association of Optometrists (CAO) does not recommend blue light glasses — or any other special eyewear for screen use. It states that “many eye symptoms caused by computer use are only temporary and will lessen after you stop using the computer.”

If you’re suffering from persistent eye strain or soreness, it may be a sign of a more severe condition and you should seek medical advice. The CAO recommends everyone visit an ophthalmologist for a basic eye exam by the time they are 40.

Moreover, blue light glasses are not marketed as a medical device. Therefore, the FDA does not impose any regulations on these products, which means any health claims from manufacturers don’t have to be backed by scientific evidence.

All of that said, there’s anecdotal evidence that blue light glasses work for some people. Therefore, it’s ultimately a choice of whether it’s worth spending the money. But you may not always get what you pay for, according to a review by Consumer Reports.

If you’re looking for a better night’s sleep, then you’ll want glasses that block as much blue light as possible. Consumer Reports tested three glasses: One for $8, $40, and $53. The $8 pair by Uvex Skyper blocked the most blue light of the three pairs.

In the end, it may be worth trying some other methods for getting better sleep or preventing eyestrain.

Schedule An Appointment
Our Promotions
Email Us